Colman had an appointment at Texas Children’s Hospital in Houston on Tuesday, July 2nd, for his three-month checkup at the Cardiomyopathy Clinic. My mom decided to tag along with us, which was nice, so I picked her up on our way to Houston last Monday. Then we all met up with Robbie and his family. Robbie was one of Colman’s classmates in Spanish Immersion for the last three years and he and his family just moved to Houston about a month ago. I think the boys thought they’d never get to see each other, but I think we have a new tradition from here on out of going to dinner with Robbie when we’re in Houston. The boys had a really good time talking and playing their DS games and Colman can’t wait to see him again.

I was notified on Monday when we were on our way to Houston that our appointment was moved from 9:00 a.m. to 1:30 p.m. on Tuesday because of some sort of scheduling difficulty, which worked out because we all slept in until 9:15 a.m., at which point I checked my phone and the person from scheduling had called several times wondering where we were because their computer was showing us as already checked in.

So I had to swallow my panic that I had somehow screwed up our appointment times and I called her back. She kept insisting that we were at TCH because we were already checked in. I finally had to tell her that there’s no way that could’ve happened because we were still in bed at the hotel.

We were still scheduled for 1:30, but there had been a no-show and they thought since we were already at TCH and checked in, we could go ahead and get our echo done early. It didn’t really matter, though, because our doctor appointment at clinic wasn’t scheduled until 3:00 p.m.

So we got up and got ready for the day and headed out for breakfast, which actually turned out to be lunch because of our late start. Then we went up to the twentieth floor to check in, for real, for our appointment at 1:30. 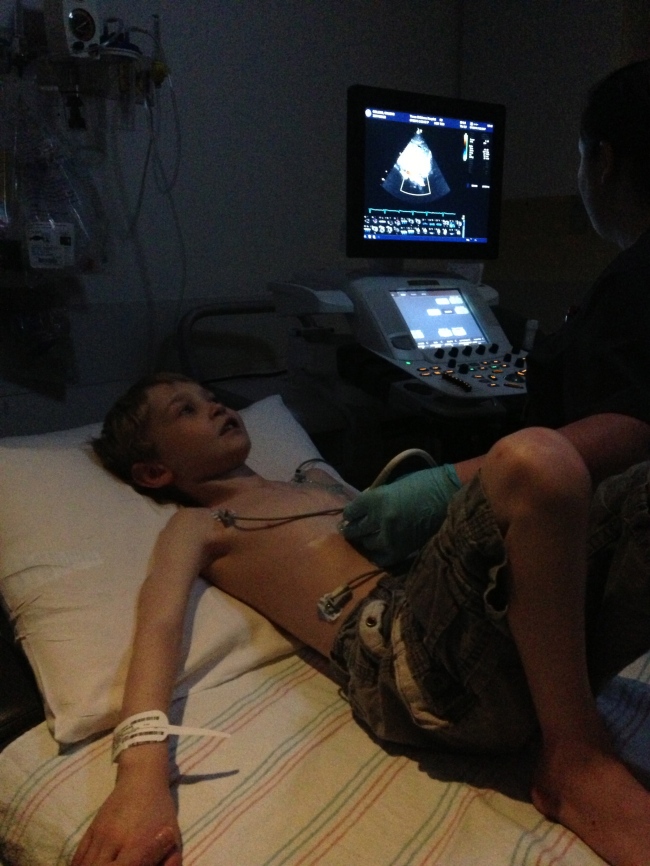 It’s amazing the difference in Colman’s demeanor when he gets his echo now that we finally had the broken sternal wires removed. He still complains a little bit, which I think is a result of all the scar tissue he has, but it’s not anything like it was before. He was actually able to relax a bit and watch the TV.

After the echo, we saw Corey, the cardiomyopathy coordinator, and Dr. Jeewa. I think I’ve mentioned before that Colman’s growth, or lack thereof, was a major concern of mine. Fred, our pediatrician, was worried about it, too, once we started looking at the numbers and he faxed over all of the data to TCH so they would be aware of it as well. I’d actually made TCH aware of the fact that I didn’t think he was growing, but when they asked about data, I gave them the mom version, which was something along the lines of, “I bought that pair of jeans he’s wearing at Gap, like, three years ago and they still fit.”

Not exactly the scientific data they were looking for.

Now they have all of the data from our pediatrician, which is exactly what they were looking for. They also have been charting him as well, but it helped to complete the whole picture. Dr. Jeewa said they’d all kind of breathed a huge sigh of relief that Colman’s pressures were so much better in the last heart cath. The heart function still doesn’t look good, but it’s not terrible and the tricuspid valve leak is still very leaky and seems to be unchanged. The fact that he’s not growing or able to put on any weight is a sign that his heart is sucking every last calorie he’s taking in for energy and leaving him nothing for growth, which is not good.

Dr. Jeewa asked if I’d seen a nutritionist and I told him that I’d met with one in San Antonio, and I’ve also been working with Sundae Rich, a nutritionist from TCH, who works with the heart kids, for the last two months now which seemed to satisfy him. I’m so happy that I got on that without waiting for them.

Dr. Jeewa asked about Colman’s quality of life. That’s a hard question to answer because Colman’s a happy kid and doesn’t complain much. But when I really think about it, Colman’s quality of life kind of sucks. He can’t participate in PE at school and he has to sit out at recess when it gets too hot. He missed the last day of school, which was his field day, because he got really hot at recess the day before and just couldn’t bounce back enough to go to school the next day. When his brothers go outside to play, they run and yell, play chase and kick the soccer ball. Colman sits in the shade on the patio.

And Kevin and I carry him a lot. Hot day and we have to park far away at the grocery store? We carry him. If we’re somewhere there’s a ramp or a lot of steps? We carry him. It’s a great workout for Kevin and me, but at nine years old, he should be running circles around us.

So Dr. Jeewa was going to talk about Colman in conference on Wednesday, July 3rd. I haven’t heard anything regarding what was said at conference, but the plan moving forward is this: Dr. Jeewa thinks it’s reasonable to give me another four months to try to put some weight on him and see if I can get him to grow, which would be a total of six months working with the nutritionist. At this point, I’ve managed to keep him from losing any more weight and he’s holding steady at forty pounds and he’s 119.5 cm tall. We will go back in two months for an appointment with the Transplant Clinic and there Kevin and I will have the TALK, get the BOOK and sign the CONSENT. (They said it just like that, although Corey assured me that there wasn’t anything in this particular appointment that would surprise me.) Then I will take Colman the following week to undergo the evaluation for heart transplant, which takes three whole days. We will have eight different appointments with infectious disease doctors, social workers, cardiology, cardiothoracic surgery and a psychiatrist to name a few. And there will also be appointments with the lab for lots and lots of blood work. Biggest concern as far as Colman’s blood are going to be his antibodies. Children who have had as many surgeries and blood products as Colman has usually have very high antibodies in the blood, which makes finding a heart that would be a good match more difficult.

Then we will have another appointment two months after that, which will be four months from now, at the Cardiomyopathy Clinic to see if I’ve made any progress as far as his growth. If Colman is still not on the growth chart at that point in time, it looks like they are going to list him for a heart transplant.

I asked Dr. Jeewa, “If Colman were to be listed now, what status would he be listed as?” and Dr. Jeewa answered, “1B.”

Colman would be listed as a 1B because of the fact that he’s fallen off of the growth chart. Dr. Jeewa finally said it comes down to a quality of life question at this point and he kind of put the ball back in my court, but I think 1B is my answer. I definitely think it’s reasonable to see if I can make any progress as far as Colman’s nutrition goes in the next four months because the better his nutrition is going into the heart transplant the faster he’ll recover. This is something we’ll have to work on while he’s listed anyway. But I don’t see his nutrition getting any better than it is right now and his heart is only going to get worse.

It looks like we’re getting closer to pulling the proverbial trigger. Dr. Jeewa said, “This is a quality of life question and that’s the only discussion we have. We don’t discuss quantity of life when we’re talking about heart transplants. As soon as we put the new heart in, the clock starts ticking.”

I’m happy to have a plan.

How do I feel about everything else?