Last Thursday was yet another trip to TCH for Colman and me. We had our long-awaited genetics appointment set for the afternoon, so since we were going to be in Houston anyway, Dr. Liou wanted Colman to do another treadmill test to see how he was performing post fenestration closure.

Last time he couldn’t even finish the ten-minute test. He only made it to six minutes, turned blue with oxygen saturations in the mid sixties and stumbled off the treadmill. The nurse administering the test caught him, thankfully. However, this time, he completed the full ten minutes on the treadmill, and although he was a bit winded and tired at the end, his all-time low for oxygen saturations was 96 percent.

Dr. Liou thought she had a clear schedule for Thursday and wanted to come visit with Colman to show him the device she’d used to close the hole in his conduit, but they added two caths at the last minute. So Dr. Liou sent Sheryl, her nurse, up to the 20th floor to see Colman and show him the type of device they used and his x-rays. Sheryl is super cool, and Colman was happy to see her, but Colman was a little disappointed that he wouldn’t get to see Dr. Liou.

I did, however, get a picture of Colman and Sheryl together, which I thought was pretty adorable.

Colman told me not long after this picture was taken that he didn’t think it was funny that Sheryl and I were teasing him about Dr. Liou.

We went to lunch in the cafeteria, and then headed over for our genetics appointment. The genetics doctor was very thorough. He took his time checking Colman’s hands and fingers. He checked all of his ribs. He checked his spine. He checked how Colman’s joints moved. Then he seemed to spend an inordinate amount of time looking at Colman’s feet. Colman has really long, skinny feet and I couldn’t help but wonder to myself, Oh, crap, what if long, skinny feet is a sign of something bad?

After he finished the examination, he said, “He’s perfect. There are no signs of any other sort of syndromes that we associate with complex heart defects. I think his growth problems stem from his heart.”

And I let out a breath that I hadn’t realized I’d been holding.

The genetics doctor did suggest that we move for insurance authorization to have a micro array done, which is a test where they look at a set of four thousand genes to see if there’s any part of the genes that have any additions or deletions. This particular set of genes are known to have a correlation with congenital heart defects. He described genes as a book and sometimes in the book, you might have chapters, pages or even just a few words deleted or added. So that’s what they’d be looking for there. He has a seventy percent hunch that test will come back negative and we won’t find anything. He also wants to do an Exome test, which would require blood from Kevin, Colman and me. He said the main problem with this test is there are sometimes surprises that geneticists don’t really know what to do with, such as, I might have the gene for a particular kind of cancer or Parkinson’s or something like that. I told him, “I can either be surprised now or surprised later.”

We finished up with the genetics doctor and I signed all the paperwork so they could move forward with the preauthorizations for testing. They said it should take four to six weeks to get insurance approval. Then once the testing is completed, the micro array will take about four weeks to get the results and the Exome testing will take closer to three or four months.

Colman and I stopped at the restroom and the gift shop before we got back on the road to San Antonio. As we were walking out of the hospital, we hit the hand sanitizer one more time. Colman was rubbing his hands together and brought his hands to his nose. “I just love the way this smells,” he said.

I crinkled up my nose. “It smells like the hospital to me,” I said, thinking about the many times Colman’s been in the hospital over the past ten years. That smell always takes me right back to the first time I saw him after his surgery. I always have to fight off a little bit of queasiness at the memories hand sanitizer conjures up for me.

Colman got a little smile on his face and smelled his hands again. “It smells like Dr. Liou,” he said dreamily.

I said, “Colman, you cannot say stuff like that about Dr. Liou and not expect me to tease you about it just a little bit.”

Well, that’s true. Her and every other doctor and nurse in the hospital.

Colman and I returned back to San Antonio about 7 p.m. that night to a huge package of “Thank you” cards and other small presents that were sent to him from UTHSCSA. We went a couple of months ago to assist in teaching the first-year medical students after they finished a clinical in congenital heart defects. Colman spoke to over 200 students in the giant lecture hall, and I was so proud of him. 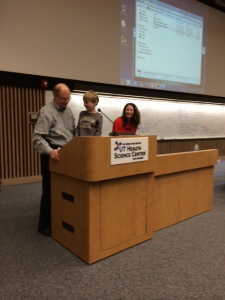 This is Colman with Dr. Rogers, the pediatric cardiologist who diagnosed Colman in utero and helped us put our team together here in San Antonio. Colman couldn’t reach the microphone, so Dr. Rogers gave him a boost onto the podium. (That’s me in the background laughing like a loon at something Colman said.) I was a little nervous because when he’d rehearsed what he was going to say the night before, he would always start out saying, “Hello, weirdos!”

(That’s not how he greeted them. Thank goodness!)

But after Colman told them a little bit about himself, he left with my cousin, Sarah, and I stayed for the question and answer session. The students were all super cute and had great questions. So that was a fun package to get in the mail. Lots of great drawings of superheroes that Colman pinned up on his bulletin board and a lot of really neat handwriting.

I was impressed with their neat handwriting. I’d always sort of been under the impression that bad handwriting was a prerequisite to medical school, but apparently not. Everything was super legible, which now has me wondering when the scary doctor handwriting starts?

Colman looks and feels great. I had lots of calls and texts last week from parents of kids in Colman’s class. He joined a game of soccer on the playground and scored a goal. His activity is still restricted, but I refuse to wrap him in bubblewrap. If he feels he can do it, I want to let him try. It really is amazing to see such a difference in him, and I’m so grateful he has such good friends. We live in such a great, tight-knit community.

2 thoughts on “Purell: A love elixir”